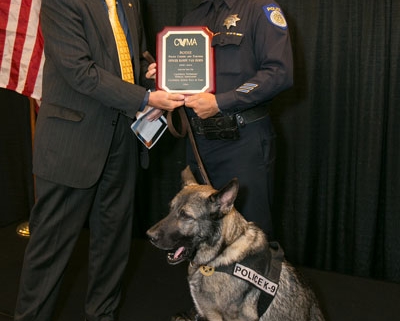 K9 Bodie saved the life of his Sacramento Police Officer, Officer Van Dusen on May 18, 2012, taking a bullet from a suspect and allowing Officer Van Dusen to move in a safe direction and return fire. Bodie also stopped a dangerous gunman from escaping onto the grounds of an elementary school, which was in session with hundreds of children.

Bodie and Officer Van Dusen were in pursuit of a suspected car thief when the suspect shot Bodie in the jaw and paw. Van Dusen then fatally shot the suspect. Van Dusen immediately drove Bodie to VCA Animal Hospital in Rancho Cordova. Bodie nearly died on the way, losing most of the blood in his body.

The bullet shattered Bodie’s lower left jaw bone, severed his tongue 60 percent of the way off, exited his right lip and entered his right paw, shattering his two middle toes. Bodie was in the veterinary hospital for one week before being released.

Officer Van Dusen spent every day and night with Bodie, sleeping on the floor of the dog kennel. Bodie had five major surgeries to repair the damage, including one in January 2013 to remove a ruptured spinal disk that occurred as a result of the shooting. Bodie became the Sacramento Police Department’s first ever Reserve Police K9 and serves as an ambassador for police and working dogs. He educates the public about the benefits of police canines and the bond shared between and them and their human partners.

“Bodie unselfishly saved my life and I will never be able to repay him,” Officer Randy Van Dusen said.