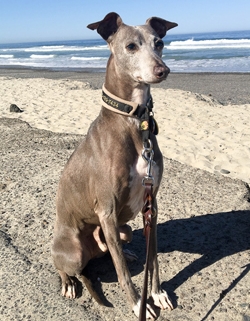 In 2008, when Bob Schultze first met his dog Hudson, he was unsocialized, wary/aggressive toward strangers and other dogs, and had a severe heartworm infection. Despite his issues, Bob still adopted him. With time, training, and love, Hudson thrived and passed his Canine Good Citizen test in February 2012; was certified for pet encounter therapy (PET) in 2013; and has made over 150 therapy visits to 20 facilities in San Diego County including nursing facilities, memory care units, the VA hospital, and even a school for homeless children since then.

Hudson’s temperament is very gentle and patient and he can stir reaction from even the most unresponsive clients. He is described as a star wherever he goes and that he shines the brightest with clients that can’t respond with more than a small touch. One of many examples that highlights his therapeutic capabilities was with a client in hospice that had not been responsive for more than three weeks. His family had asked Bob to help. Bob placed Hudson next to their father and Hudson laid his head on the man’s hand. Soon the man started to pet him and kept petting him for the rest of the visit. The man’s response made his family cry and they were overjoyed that he was able to find comfort with Hudson.

Another example of Hudson’s therapeutic touch involves a client that spends most of his days in a wheelchair with little movement. While the way he is positioned in the wheelchair makes it difficult for other therapy dogs to reach him, it is no problem from Hudson. Hudson will gently mold his body to the man’s in his reclining chair and will lean in to share his warmth. The man’s usually labored breathing will start to ease and his muscles relax.

Hudson’s loving nature despite having been given up and his service as a therapy dog, exemplifies the importance of the human-animal bond. After his rescue, his body and spirit were made whole and he is now giving back one PET visit at a time.